When EdF (Cottam Power) needed a starter for the MV drive fitted to a hammer mill at its Nottingham site, most suppliers claimed that only a costly variable speed drive would be suitable. Softstart UK, however, with its wide experience of similarly demanding applications, was confident in offering instead a much more cost-effective MV soft starter. This has proved entirely satisfactory in service, and its adoption has allowed EdF to make substantial savings on the overall budget for the project. 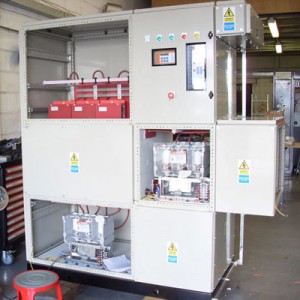 At its Nottingham site adjacent to Cottam Power Station, EdF pulverizes olive cake, which is made from the husk residue that remains after olives have been processed to extract their oil. The company then mixes the pulverized cake with coke to form an environmentally friendly bio fuel that is burned in the power station.

The pulverizing process is carried out using a hammer mill that essentially comprises a cylindrical “squirrel cage” with six bars. Hammers are attached to these bars and, as the cylinder rotates they flail out, pulverizing the olive cake. To ensure that the hammers wear evenly, the direction of rotation of the mill reverses each time it starts. The hammer mill is no small machine. It receives olive cake via a triple screw feeder at a rate of up to 30 tonnes per hour, and it is driven by a 350 kW 3.3 kV motor. The drum with its hammers attached has very high inertia and takes up to 15 seconds at start up to reach its full operating speed of 3,000 rpm. These characteristics mean that conventional direct-on-line starting is not possible because the very high torque that would be generated during the starting process would be likely to damage the couplings in the drive system.

For help in addressing this problem, the engineers at EdF approached a number of suppliers of MV drive systems and, in almost every case, were told that the only feasible solution would be to install a variable speed drive, as this would allow the most flexible control of the motor during start up. In particular, the engineers were warned against the use of a soft starter as, it was claimed, this would be unable to consistently provide the accurate starting control needed.

Softstart UK disagreed with these claims, and advised EdF that, on the basis of its previous experience with high-power hammer mills, a soft starter would, in fact, be entirely adequate and that using one instead of a variable speed drive would reduce the overall project cost by thousands of pounds. After carefully considering this suggestion, the EdF engineer decided that a soft starter would be used and surveyed the market for a suitable product.